As per S. 2(7) of the Income Tax Act, 1961, unless the context otherwise requires, the term “assessee” means a person by whom any tax or any other sum of money is payable under this Act, and includes,-

(b) every person who is deemed to be an assessee under any provision of this Act;

(c) every person who is deemed to be an assessee in default under any provision of this Act. 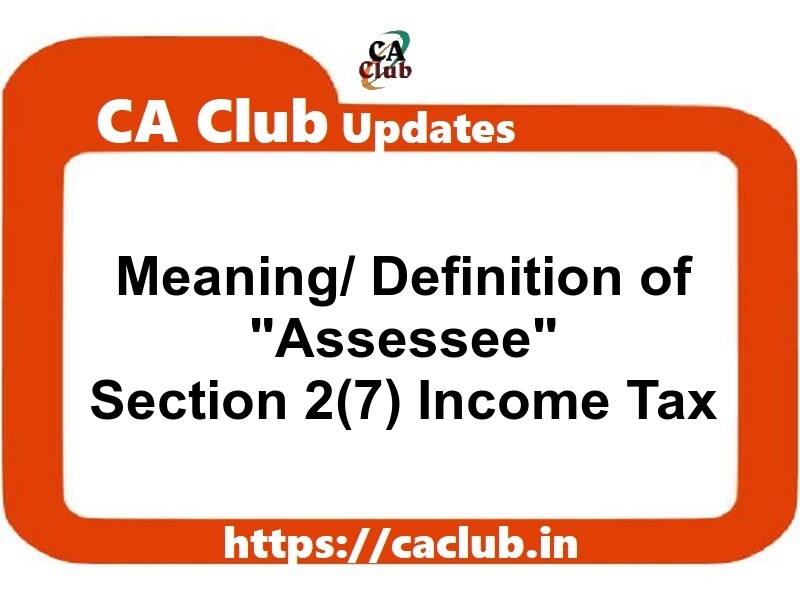 Types of Assessees under Income Tax

According to the above definition, a “assessee” is someone who is liable for tax under the Income Tax Act. However, to fully grasp the meaning of “assessee,” it is important to also be familiar with the following:

i) any person against whom proceedings under Income Tax Act are going on, irrespective of the fact whether any tax or other amount is payable by him or not;

ii) any person who has sustained loss and filed return of loss u/s 139(3);

iii) any person by whom some amount of interest, tax or penalty is payable under this Act;

iv) any person who is entitled to refund of tax under this Act.

A person may be liable not only for the assessment of tax on his own income or loss, but also for the income or loss of others, such as an agent of a non-resident, a guardian of a minor or a lunatic, and so on. In such instances, the person responsible for tax on such person’s income is known as a representative assesses. Such an individual is deemed an assessee.

i) In case of a deceased person who dies after writing his will the executors of the property of deceased are deemed as assessee.

ii) In case a person dies intestate (without writing his will) his eldest son or other legal heirs are deemed as assessee.

iii) In case of a minor, lunatic or idiot having income taxable under Income-tax Act, their guardian is deemed as assessee.

iv) In case of a non-resident having income in India, any person acting on his behalf is deemed as assessee.

If a person fails to meet his statutory requirements, he is considered an assessee-in-default. For example, an assessee who fails to pay the demand u/s 156 in full within 30 days will be considered a ‘Assessee in Default,’ unless he obtains an Order Staying the Demand in due process. Until an assessee clears the demand/obligations in full, he will remain in default.

Furthermore, it is the responsibility of an employer paying a salary or a person paying interest to deduct tax at the source and deposit the amount of tax collected in the government treasury. He is regarded as an assessee-in-default if he fails to deduct tax at source or deducts tax but does not deposit it in the treasury.