CBDT has revised these guidelines keeping in view the policy of Government on decriminalization of offences and ease of doing business to allow similar treatment for various offences covered under the prosecution provisions of the Income Tax Act, 1961 as well.

Some of the major changes made by the CBDT in the revised guidelines on Compounding of Offences under the Income Tax Act, 1961, meant for benefit of the taxpayers, includes:

i) Offence punishable under Section 276 of the Income Tax Act 1961 is now compoundable.

ii) Scope of eligibility for compounding of cases has been relaxed, whereby case of an applicant who has been convicted with imprisonment for less than 2 years being previously non-compoundable, has now been made compoundable.

iii) The discretion available with the competent authority has been suitably restricted.

iv) The time limit for acceptance of compounding applications has been relaxed from the earlier limit of 24 months to 36 months now, from the date of filing of complaint.

vi) Specific upper limits have been introduced for the compounding fee covering defaults across several provisions of the Income Tax Act, 1961.

vii) Additional compounding charges in the nature of penal interest @ 2% per month up to 3 months and 3% per month beyond 3 months have been reduced to 1% and 2% respectively. 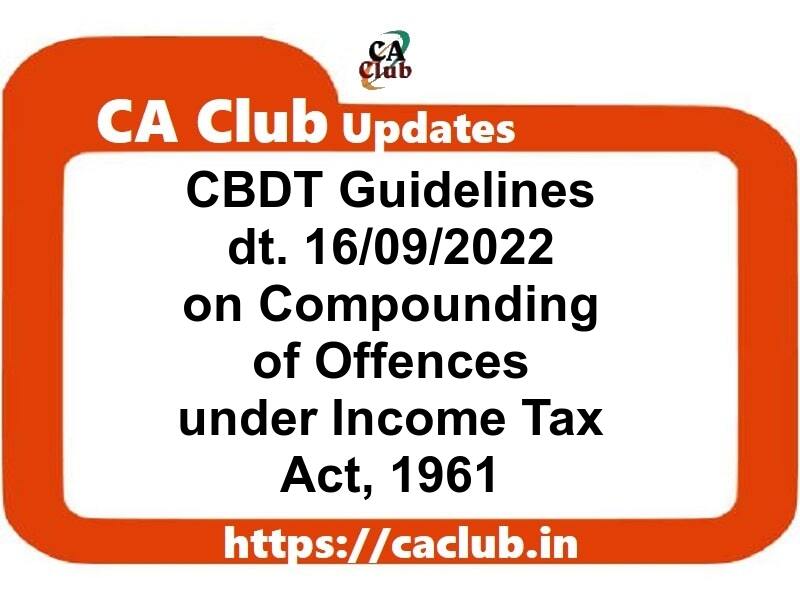 It may be noted that Compounding of offences is not a matter of right. However, offences may be compounded by the Competent Authority on satisfaction of the eligibility conditions prescribed in these Guidelines keeping in view factors such as conduct of the person, the nature and magnitude of the offence in the context of the facts and circumstances of each case.