Final users should be aware that financial statements are prepared/presented by adhering to certain basic/ fundamental accounting assumptions, such as going concern, consistency, and accrual, which are not required to be explicitly disclosed. 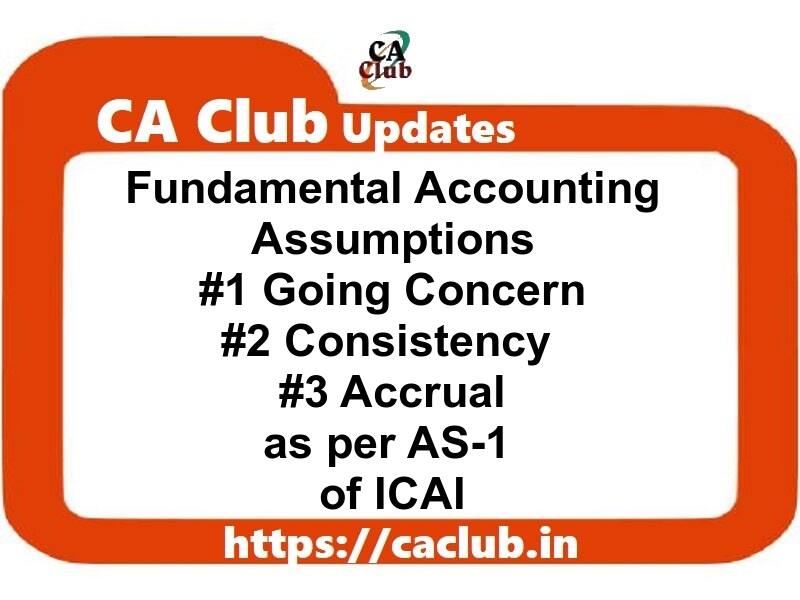 The following have generally been accepted as fundamental accounting assumptions:

One of the fundamental accounting assumption is preparation of financial statements on ‘Going Concern’  basis, i.e. the enterprise is expected to be continuing it’s operations for the foreseeable future. In other words, it is assumed that the enterprise has neither the intention nor the necessity of liquidation or of curtailing materially the scale of the operations.

The financial statements are normally prepared based on the assumption that operations of an enterprise will continue in the foreseeable future, i.e. neither there is any need nor any intention to materially curtail/ reduce the scale of operations or level of activities. In case of intention or necessity to enter into a scheme of arrangement with the enterprise’s creditors or to liquidate in near future, may not allow an enterprise to prepare the financial statements based on ‘going concern’ assumption.

Financial statements prepared on going concern basis recognise among other things the need for sufficient retention of profit to replace assets consumed in operation and for making adequate provision for settlement of its liabilities. If any financial statement is prepared on a different basis, e.g. when assets of an enterprise are stated at net realisable values (NRV) in its financial statements, such basis is required to be disclosed.

The business is usually considered to be a “going concern which means that it is in operating for the foreseeable future. It is presumed that the business does not have the intention or the need to shut down or reducing the size of its operations. Therefore, use of ‘going concern’ assumption in preparation of financial statements reflects that such entity has intention to continue business activities/ operation in foreseeable future. In other words there is no plan to discontinue/ liquidate the business in near future.

Consistency assumption refers to the underlying fact that the same accounting guidelines are adhered to while preparing financial statements from one period to the next. There are no frequent changes to be expected. It is assumed that accounting policies are consistent from one period to another.

The principle of consistency refers to the practice of using same accounting policies for similar transactions from one accounting period to another. The consistency improves comparability of financial statements through times. However, change in accounting policy is permitted in exceptional circumstances, if the change is required,-

(ii) by an accounting standard; or

Revenues and costs are accrued, that is, recognised as they are earned or incurred (and not as money is received or paid) and recorded in the financial statements of the periods to which they relate. (The considerations affecting the process of matching costs with revenues under the accrual assumption are not dealt with in this standard.

Under the ‘Accrual’ based accounting, transactions are recognised as soon as they occur, whether or not cash or cash equivalent is actually received/ paid or not. Accrual basis ensures better matching between revenue and cost. Profit/ loss calculated based on accruals, reflects activities of the enterprise during an accounting period, rather than cash flows generated by it.

Accrual basis may be a more logical approach for profit determination vis-a-vis the cash basis of accounting, however it exposes an enterprise to the risk of recognising an income before actual receipt. The accrual basis can therefore overstate the divisible profits. Dividend decisions based on such overstated/ unrealised profit may lead to erosion of capital. For this reason, accounting standards require that no revenue should be recognised unless the amount of consideration and actual realisation of the consideration is reasonably certain.

Assumption relating to Accrual indicates that Financial Statement have been prepared based on mercantile system, wherein the effect of transactions is recognised/ recorded when they are entered into (and not when the cash is received or paid) and accordingly they get reported in the financial statements of the relevant financial year to which they relate.

Now it seems to be reasonably clear what is Going Concern, Consistency and Accrual basis of Accounting.

Considerations in Selection of Accounting Policies as per AS-1

Nature & Disclosure of Accounting Policies as per AS-1

Fundamental Accounting Assumptions (Going Concern, Consistency & Accrual) as per AS-1

AS-1 of ICAI: Disclosure of Accounting Policies

List of Accounting Standards of ICAI: AS-1 to AS-32