ICAI decides to form a Group to interact as an interface with the Investigation Authorities, for ensuring ‘fair trial of CAs in the fraud cases’ by protecting them from tricky arrests or being made ‘Soft Target’.

After careful consideration, the ICAI has decided to form a Group comprised of certain members of the CA profession to act as an interface with the Investigation Authorities, to protect and ensure that CAs are not made a “soft target” and that they receive “just and fair” treatment during the course of any investigation, and to avoid tricky arrests of CAs instead of taking strong action against the actual perpetrators (concerned unscrupulous tax payers/officials).

On 20/05/2022, the ICAI Council discussed the arrest of two Gurugram CAs, followed by ill-treatment by Gurugram GST officers, and expressed its strong resentment. It also expressed its members’ concerns and resolved to form a members’ group to ensure a just and fair trial in such cases of fraud rather than resorting to evasive arrests of CAs. 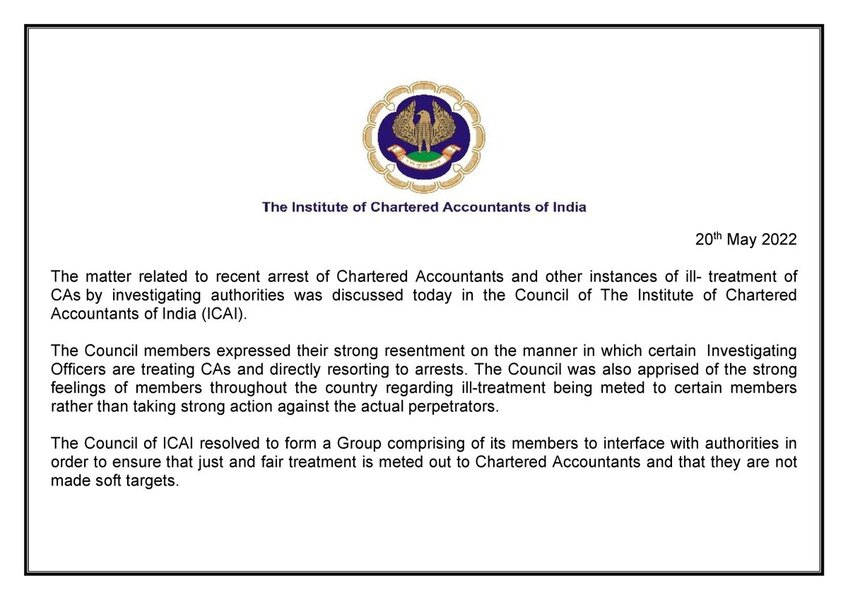 ICAI, on the other hand, has yet to make public information about the Group’s constituents and operations. Most Members want an immediate solution rather than delaying action against unscrupulous officials who are deliberately targeting CA professionals.

It is past time for the ICAI to wake up and take the necessary steps to protect its members from being designated as “soft targets” by various authorities, while the true masterminds and profiteers remain safe and free.

What happened in Gurugram is truly terrifying. CAs were arrested despite having performed their professional duties in due course, prior to GST certification work. It is preferable if the GST Department can perform the detective work itself before issuing refunds, rather than later passing the buck to CAs.

The ICAI has shown solidarity with two disgruntled members from Gurugram, which is commendable and appreciated. However, there has been no official statement in the public domain, i.e. on the ICAI website, as to what has actually occurred. It is preferable to share all facts and figures about these events for public support and information.

Furthermore, the ICAI should ensure that all departments/authorities seeking CA certificates first issue detailed specific instructions and scope of work, and the ICAI should also provide updated Guidelines on a regular basis.

The author has not attempted to hold accountable any Businessmen, Corporate, Ministry/ Authority of GOI/ SGs, Officials of Tax Departments or Other Regulators in the above write-up, as the ICAI or its Members (THE SCAPE GOAT) are solely responsible for anything and everything that has gone wrong against the expectations of any of the above. The only hope is that the judiciary will correct the situation.

And, dear ICAI Members, be careful when you next hear the narrative that ‘Chartered Accountants are Partners in the Nation Building’ !! JAI HIND !!

Smt. Sitharaman held a meeting with the ICAI delegation, led by ICAI Vice President CA Shri Aniket Sunil Talati. The MoF had invited the ICAI delegation on Saturday to discuss various issues, including ongoing investigations by the CGST Gurugram into alleged role of their members in fraudulent GST refunds.

The representatives of ICAI were informed of the suspension of a Deputy Commissioner of GST on 22/05/2022 and a superintendent on 21/05/2022 itself. Smt Sitharaman was appreciative of the steps taken by the ICAI on engagement with stakeholders.

The ICAI representatives informed Smt Sitharaman that they’ll continue to use recently enacted ‘CA, CWA and CS Act’ for the inculcation of professional discipline & integrity among its members.