The ICAI has issued an advisory to its members regarding the use of prefix ‘CA’ in the name or the designation as ‘Chartered Accountant’, when expressing opinions/ views on professional/ other matters in the public domain/ social media. 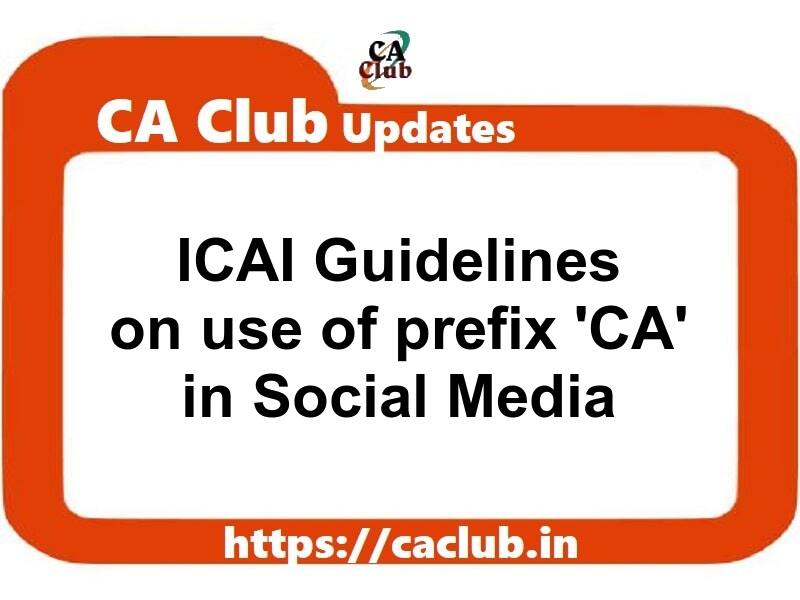 The ICAI has reiterated that a CA Firm may have an account on Social Networking website(s), where it may mention its name and other contents in accordance with the ICAI’s Advertisement Guidelines, 2008, which appear in Volume-II of the Code of Ethics.

Further, a Member in CA Practise may create an account on a Social Networking website(s) and represent himself as a proprietor or partner in a Firm. The contents of the aforementioned website must adhere to the Institute’s Advertisement Guidelines for 2008.

Besides, a Member in practise or service, may have a personal account on social networking website(s), where he/ she can share content in personal capacity. In addition to personal content, certain items indirectly related to CA profession are permitted for mention on such social media website(s):-

i) Uploading educational videos subject to compliance with the relevant provisions of the Code of Ethics.

ii) Posting content that helps the profession grow in the eyes of the world and contributes to its reputation by using expert knowledge in the respective specialisation to enrich discussions, solve problems, and promote learning and idea-sharing.

ICAI has clarified that members can use the prefix “CA” with their name on such social networking websites, for such permitted type of content/ uploads/ posts.

However, ICAI has advised the Members to use professional discretion and the utmost dignity when using the designation “chartered accountant” or the prefix “CA” on their personal account on the social networking website(s) for posting contents/ comments that do not fall under permitted category.

The ICAI believes that it is inappropriate for Members to post contents/ comments on social networking website(s) that are derogatory or not in accordance with the dignity of the profession or result in a negative portrayal of the profession. As a result, the ICAI strongly advises against posting such content/comments with the designation “chartered accountant” or the prefix “CA.”

The ICAI has also informed members of the potential violation of Clause (2) of Part-IV of the First Schedule to The Chartered Accountants Act, 1949, relating to professional misconduct resulting from their actions, whether or not related to professional work, and bringing disrepute to the profession.

ICAI Advisory dt. 22/10/2022: Use of designation “Chartered Accountant” or prefix “CA” by members while expressing views on professional/ non-professional matters publicly including on social media