ICAI has issued ‘Technical Guide on Audit of Charitable Institutions u/s 12A of the Income-tax Act, 1961‘ (2022 Edition), for guidance and assistance of Members/ Other Stakeholders, in view of the complexities involved in the governing law and frequent amendments therein. 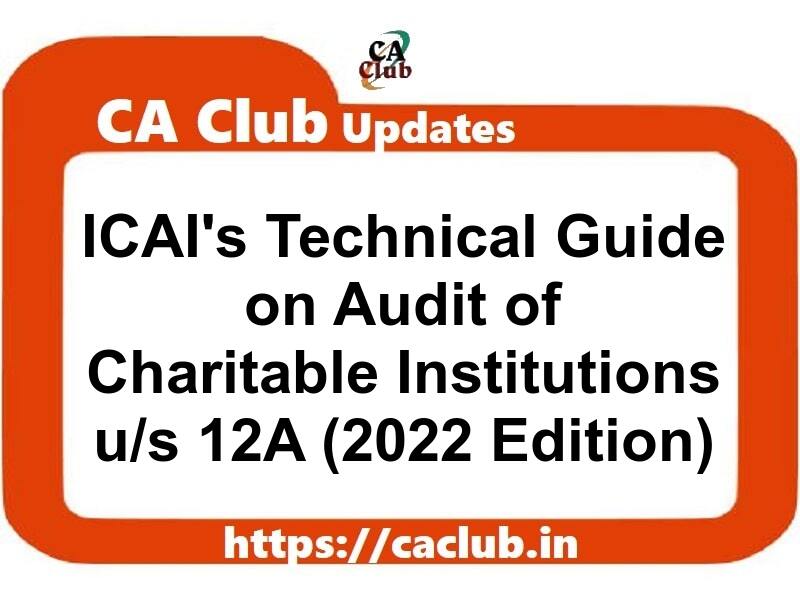 As per Section 11 of the Income-tax Act, 1961, income derived from property held under trust for charitable or religious purposes specified thereunder, by a trust, society, company registered under section 8 of Companies Act, 2013 or any other legal obligation, is exempt from tax subject to certain conditions prescribed under the Act.

This Technical Guide of ICAI deals with the audit of Trust/ Institutions, prescribed u/s 12A(1)(b)(ii), which is conducted essentially to ensure compliance with the provisions of sections 11 to 13 of the Income Tax Act, 1961.  The nature of audit required u/s 12A is similar to audit of general purpose financial statements. Hence, the auditor has to adopt the same procedures of audit as prescribed under Auditing and Assurance Standards (AASs) while certifying true and fair view shown by the financial statements.

The object of ICAI’s Technical Guide on Audit of Charitable Institutions u/s 12A is to provide guidance to the auditors for conduct of audit of such Institutions in due course. Further, this Guide can be quite useful for proper maintenance of books of accounts and other records by the officials concerned. This Technical Guide intends to:

(i) assist in understanding the respective responsibilities of the institution and the auditor;

(ii) guide the auditor as to the nature and scope of information to be obtained by him from the institution to enable him to conduct the audit;

(iii) provide guidance on the verification procedures to be adopted by the auditor for giving the audit report and the necessary information in the annexure thereto;

(iv) to give an idea about the various aspects including issues relating to the law of taxation of public charitable institutions;

(v) explain the circumstances where a disclosure or qualification or disclaimer may be required from the auditor while giving his audit report;

(vi) to provide guidance in ensuring compliance with the Accounting Standards issued, prescribed and made mandatory by the Institute of Chartered Auditors of India; and

(vii) to facilitate compliance of Auditing and Assurance Standards issued, prescribed and made mandatory by the Institute of Chartered Auditors of India.