On November 17, 2022, the Income Tax Department conducted an IT Search and Seizure operation, which resulted in the discovery of black money worth more than Rs 100 crore. This operation targeted numerous groups in Bihar engaged in the gold and diamond jewellery and real estate businesses. There were over thirty locations that were investigated, some of which were in Patna, Bhagalpur, Dehri-on-Sone, Lucknow, and Delhi.

During the course of the search, the Income Tax Department came across a sizeable quantity of incriminating documents as well as digital evidence that proved the taxpayer had evaded income tax. All of these items were promptly seized. 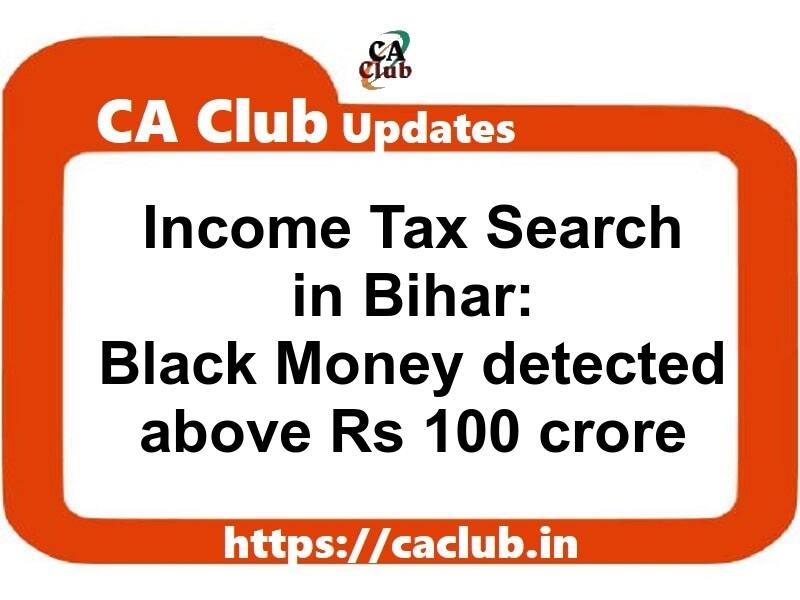 In the case of one of these groups engaged in the business of gold and diamond jewellery, an income tax search and seizure action has revealed evidences of the group’s involvement in using unaccounted income for cash purchases of jewellery, shop renovations, and investments in immovable property. The evidences point to the group’s participation in money laundering. Under the guise of customer advances, it was discovered that this organisation had secretly taken in unaccounted money amounting to more than 12 crore rupees and recorded it in its books of accounts. In addition, during the search action, it was discovered that there was unaccounted stock that was worth more than 12 crore rupees when the stock was physically verified.

On the other hand, a similar IT search and seizure action carried out in the case of another group involved in the real estate business has revealed evidences of unaccounted cash transactions involving the purchase of land, the construction of buildings, and the sale of apartments. The above unaccounted-for transactions, the total value of which is greater than Rs. 80 crore, have been further supported by the evidence that was seized in the investigation of a well-known land broker. The key individuals in the group have been earning unaccounted income, which has been invested in the purchase of numerous immovable properties, including large tracts of land.

Additional analysis of the evidence seized by the IT Department is currently underway.