As part of the ‘ease of doing business’ initiative, MCA has revised/increased the ‘paid-up capital’ and ‘turnover’ thresholds applicable in the case of ‘small companies’ under the Companies Act, 2013, to reduce compliance burden for a greater number of companies to be treated as ‘small companies’. 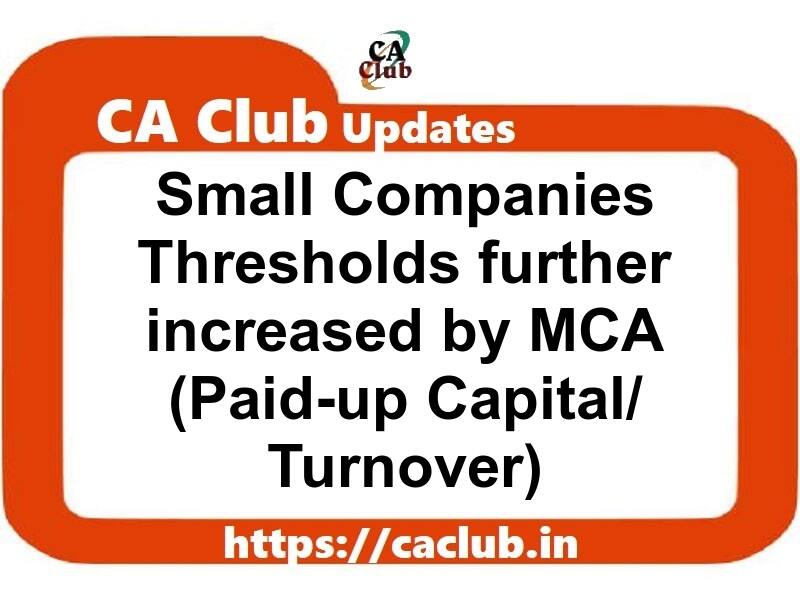 MCA has recently taken several initiatives/measures to improve the ease of doing business for corporates, such as decriminalising various provisions of the Companies Act, 2013/LLP Act, 2008, extending fast track mergers to start-ups, incentivizing the incorporation of One Person Companies (OPCs), and so on.

Thousands of small businesses contribute significantly to the growth of the Indian economy and the creation of jobs. As a result, the government is making ongoing efforts through initiatives/measures that create a more conducive business environment for law-abiding small businesses by reducing their compliance burden, allowing them to focus more on their core business.

It may be noted that small companies are eligible for certain benefits/ relaxations, in the form of reduced compliance burden, some of which are listed hereunder:

i) No need to prepare cash flow statement by small companies, forming part of financial statement,

ii) Advantage of preparing and filing an Abridged Annual Return,

iv) An Auditor of a small company is not required to report on the adequacy of the internal financial controls and its operating effectiveness in the auditor’s report,

v) Holding of only two board meetings in a year,

Given that the ‘paid up capital’ and ‘turnover’ thresholds applicable to ‘small companies’ under the Companies Act, 2013 have been further revised/increased, more companies will be able to enjoy relief from certain compliance burdens.