CBDT has issued Circular 13/2022 on Guidelines/FAQs to address issues relating to TDS under Section 194S(6) on payments of consideration for the transfer of a virtual digital asset (VDA) via an Exchange. 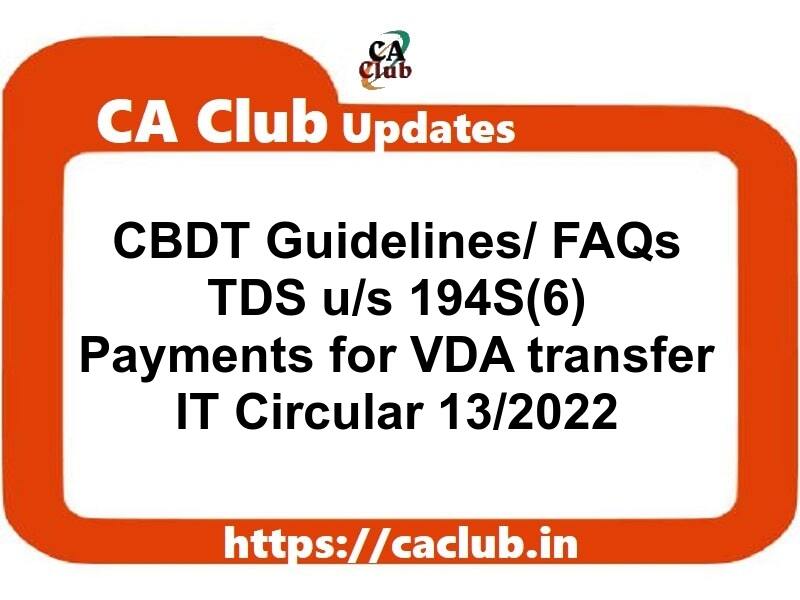 With effect from 01/07/2022, Finance Act 2022 added a new section 194S to the Income-tax Act, 1961, requiring a person to deduct TDS at 1% from payments/credits made to any resident in exchange for the transfer of a virtual digital asset (VDA), except in the following cases:

i) where the total value of consideration payable by a ‘specified person’ during the fiscal year does not exceed fifty thousand rupees; or

(ii) where the total value of consideration payable by ‘any person other than a specified person’ during the fiscal year does not exceed ten thousand rupees.

For the purposes of this provision, a specified person is defined as:

i) An individual or Hindu undivided family (HUF) who does not have any business or professional income; or

In exercise of the authority granted by Section 194S(6) of the Income Tax Act of 1961, the CBDT has issued guidelines/FAQs to assist stakeholders in resolving issues. These guidelines apply only in cases where VDA has been transferred on or through an Exchange. In other cases (such as peer to peer and others), the provisions of Section 194S of the Act apply, and clarifications provided only in Question 6 apply to these guidelines.

(i) In a case where the transfer of VDA takes place on or through an Exchange and the VDA being transferred is owned by a person other than the Exchange: In this case buyer would be crediting or making payment to the Exchange (directly or through a broker). The Exchange then would be required to credit or make payment to the owner of VDA being transferred, either directly or through a broker. Since there are multiple players, to remove difficulty it is clarified by the CBDT that:

1. Tax may be deducted u/s 194S only by the Exchange which is crediting or making payment to the seller (owner of the VDA being transferred). In a case where broker owns the VDA, it is the broker who is the seller. Hence, the amount of consideration being credited or paid to the broker by the Exchange is also subject to tax deduction.

(ii) In a case where the transfer of VDA takes place on or through an Exchange and the VDA being transferred is owned by such Exchange: In this case there are no multiple players. The buyer is required to deduct tax u/s 194S. However, there may be a practical issue as the buyer may not know whether the VDA being transferred is owned by the Exchange or not. Hence, there may be genuine doubt in the mind of buyer with regard to its responsibility to deduct tax. This difficulty would also be there if the buyer is buying VDA from an Exchange through a broker.

For the purpose of this circular, the CBDT has clarified that-

(ii) The term “Broker” means any person that operates an application or platform for transferring of VDAs and holds brokerage account/ accounts with an Exchange for execution of such trades.

Question 2: How will TDS be deducted for transactions where the consideration for transfer of VDA is in kind or in exchange of another VDA?

In the above situation, the buyer will release the consideration in kind after seller provides proof of payment of such tax (e.g. Challan details etc.). In a situation where VDA “A” is being exchanged with another VDA “B”, both the persons are buyer as well as seller. One is buyer for “A” and seller for “B” and another is buyer for “B” and seller for “A”. Thus both need to pay tax with respect to transfer of VDA and show the evidence to other so that VDAs can then be exchanged. This would then be required to be reported in TDS statement along with challan number. This year Form No. 26Q has included provisions for reporting such transactions. For specified persons, Form No. 26QE has been introduced.

However, if the transaction is through an Exchange there is practical issue in implementing this provision. In order to address this practical issue and to remove difficulty, it has been clarified by the CBDT that in such a situation, as an alternative, tax may be deducted by the Exchange. Such an alternative mechanism can be exercised by the Exchange based on written contractual agreement with the buyers/ sellers.

If such an alternative mechanism is exercised,

(ii) the buyer and seller would not be independently required to follow the procedure prescribed in proviso to section 194S(1).

When the Exchange opts for deduction of tax u/s 194S on such transactions, there is also a possibility that the tax amount deducted is also in kind and needs to be converted into cash before it can be deposited with the Government. In this regard, the following mechanism shall be adopted by the Exchange:

(i) At the time of transaction, the Exchange will deduct TDS in the pair being traded. For example, in case of trade for Monero to Deso, 1% of Monero and 1% Deso will be deducted as tax u/s 194S by the Exchange and balance shall be transferred to the customer. The trail of transactions evidencing deduction of 1% of consideration for every VDA to VDA trade shall be maintained by the Exchange.

(ii) The Exchanges shall immediately execute a market order for converting this tax deducted in kind (1% Monero/ 1% Deso in the above example) to one of the primary VDAs (BT, ETH, USDT, USDC) which can be easily converted into INR. This step will ensure that the tax deducted u/s 194S in the form of non-primary VDAs like Deso/ Monero is converted to an equivalent of primary VDAs which have a ready INR market. Time stamps of timing of orders to be maintained to ensure such conversion of VDAs withheld to be done on immediate basis by the Exchange. If the taxes are withheld in primary VDAs, this step would be ignored.

(iii) All the tax deducted u/s 194S in the form of primary VDAs {or converted into primary VDA under step (ii)} will be accumulated for the day. Time limit will be from 00:00 hours to 23:59 hours. VDA accumulation by the Exchange shall be verifiable from the trail of orders for VDA to VDA trades executed during the day.

(iv) The accumulated balance of primary VDAs at 00.00 hours will be converted into INR based on the market rate existing at that time. In order to bring in consistency and to avoid discretion, the Exchanges are required to place market order at 00:00 hours for the tax withheld {or converted under step (ii)} in form of primary VDAs for conversion into INR. These sell market orders shall be executed based on the open buy orders in the market. Price and quantity data for every matched trade shall be maintained by the Exchange and shall be available for verification. It shall be verifiable from the system coding that the conversion into INR happened at the first available buy order based on the prevailing buy order book of the respective Exchange at the time of conversion. As a practice, the respective Exchange liquidating the VDA shall be prohibited to be a buyer for these VDAs.

(vi) The tax withheld in kind u/s 194S and converted into INR by following the above procedure shall be deposited in the Government Account as per the time line and process given in the Income-tax Rules 1962.

It is further clarified by CBDT in this regard that there would be no further TDS for converting the tax withheld in kind in the form of VDA into INR or from one VDA to another VDA and then into INR.

Question 3: Whether the provision of section 194Q of the Act is also applicable on transfer of VDA?

Question 4: Whether the consideration for transfer of VDA shall be on Gross basis after including GST/ commission or it shall be on “net basis” after exclusion of these items.

Answer: In order to remove difficulty, it is clarified by the CBDT that the tax required to be withheld u/s 194S shall be on the “net” consideration after excluding GST/ charges levied by the deductor for rendering service.

Question 5: In transactions where payment is being carried out through payment gateways, there may be tax deduction twice. To illustrate that a person ‘XYZ’ is required to make payment to the seller for transfer of VDA. He makes payment of one lakh rupees through digital platform of “ABC”. On these facts liability to deduct tax u/s 194S may fall on both “XYZ” and “ABC. Is tax required to be deducted by both?

Question 6: Section 194S shall come into effect from 01/07/2022. The liability to deduct tax u/s 194S applies only when the value or aggregate value of the consideration for transfer of VDA exceeds fifty thousand rupees during the financial year in case of consideration being paid by specified person and ten thousand rupees in other cases. It is not clear how this limit of fifty thousand (or ten thousand) is to be computed?

Answer: It is clarified by the CBDT that,-

(ii) Since the provision of section 194S applies at the time of credit or payment (whichever is earlier) of any sum, representing consideration for transfer of VDA, such sum which has been credited or paid before 01/07/2022 would not be subjected to tax deduction.